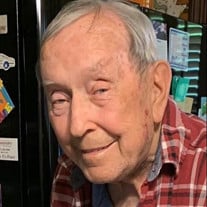 Saympson Engle 87, of Austin, Indiana passed away Thursday, October 14, 2021 in Hampton Oaks Health Campus Scottsburg, Indiana. He was known to many as 'Sleepy'. Born July 6, 1934 in Butterfly, Kentucky he was the son of the late H.C. Engle and Susie (Fugate) Engle. He was married to Imajean (Abner) Engle for 63 years prior to her death on July 6th, 2019. Saympson was a United States Army Veteran serving as a Radio and Radar Technician. He was a retired employee of the old American Can Company and was Owner of Engle Food Mart and Kilburn & Engle TV of Austin, Indiana. He served in the Past as; Austin Police Commissioner, President and Fire Chief of the Jennings Twp. Vol. Fire Department, Austin Park Board, Boy Scout Scoutmaster and member of the Old Jaycees Organization. He attended the Safe Harbor Church of God of Scottsburg, IN. and enjoyed going to Church, singing, gardening, bird watching, repairing electronics, playing musical instruments and Jeep off-roading with his sons and family. Survivors include: Sons: Jimmy (Shelli) Engle of Indianapolis, IN; Greg (Sharon) Engle of Scottsburg, IN Grandchildren: Jessica Engle of Anderson IN; Jason (Lia) Engle of New Albany IN; David (Brittney) Engle of Henryville IN; Chelsea Engle of Indianapolis IN Great-Grandchildren: Adrianne, Bryson, Bayley, Ryan, Averie, Abbi, Maci, Addison, Kayleigh, Isabella, Grayson, Mason ` He was preceded in death by 12 Brothers and Sisters. Funeral Service: 11:00am Wednesday, October 20, 2021 at Buchanan Funeral Home in Austin, Indiana with Rev. Billy Deaton & Rev, J.B. Mills officiating. Visitation will be 9am to 11am Wednesday at Buchanan Funeral Home, Austin, Indiana. . Burial will be at Wesley Chapel Cemetery Austin, Indiana. Full military honors by American Legion Post # 234, Scottsburg, IN. In lieu of flowers, memorials can be made to America Lung Association, National Kidney Foundation or Humane Society

Saympson Engle 87, of Austin, Indiana passed away Thursday, October 14, 2021 in Hampton Oaks Health Campus Scottsburg, Indiana. He was known to many as 'Sleepy'. Born July 6, 1934 in Butterfly, Kentucky he was the son of the late H.C.... View Obituary & Service Information

The family of Saympson Engle created this Life Tributes page to make it easy to share your memories.

Send flowers to the Engle family.