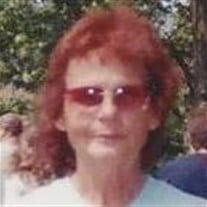 Roberta B.J. Wells, 83, of Austin, Indiana passed away Saturday, August 3, 2019 at 10:17 PM at her residence Born September 1, 1935 in Typo, KY, she was the daughter of the late Jeff and Rachel (Holland) Spicer. She was married to Elisha... View Obituary & Service Information

The family of Roberta "B.J." Wells created this Life Tributes page to make it easy to share your memories.

Send flowers to the Wells family.