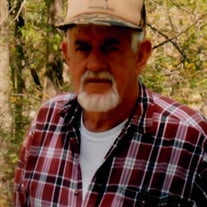 Richard Darrell Branaman, 77, of Austin, Indiana passed away Friday, October 30, 2020 at his residence Born February 28, 1943 in Seymour, Indiana, he was the son of the late Onis and Vivian (Gray) Branaman. On June 17, 2006 he married... View Obituary & Service Information

The family of Richard Darrell Branaman created this Life Tributes page to make it easy to share your memories.

Send flowers to the Branaman family.