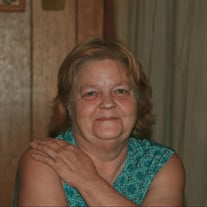 Ota Mae Campbell, 79, of Austin, Indiana passed away Saturday, April 10, 2021 in Kindred Hospital in Louisville, Kentucky Born May 4, 1941 in Perry County, Kentucky, she was the daughter of the late Charlie and Annie (Morris) Baker. She attended the House of Prayer in Austin, Indiana Ota Mae was the co-owner of Campbell’s Grocery Store on Cross Street where she loved and cared for all the children as if they were her own. Upon the closing of Campbell’s Grocery, she became an instrumental piece in working with the Austin Lions Club to build a park for all the kids in the community where the store once stood. Once the park is complete it will be called Campbell's Park. Survivors include her children, Darlene (Rick) Hall of Austin, Indiana, Raleigh (Valerie) Campbell, Jr of Austin, Indiana, and Sharlene Marshall of Austin, Indiana. Sisters, Ann Boyd of Seymour, Indiana, Jean Riley of North Vernon, Indiana, Lucy Colwell of Austin, Indiana Brother: Harrison Baker of Crothersville, Indiana. She is also survived by 7 grandchildren, Brooke, Paige, Ashlee, Malachi (Nancy), Kelsey, Allison (Elisha), Jakob and 3 great-grandchildren, Bryson, Kreedence, and Mattie-Ruth. She was preceded in death by her husband, Raleigh Campbell, Sr., her granddaughter, Alissa Marshall and a brother, Charlie Baker Memorial Service: 1:00 pm Wednesday, April 14, 2021 at Buchanan Funeral Home in Austin, Indiana with Scott Bowman officiating. Visitation will be 4 to 8 pm Tuesday and after 9 am Wednesday at Buchanan Funeral Home. Burial will be at Wesley Chapel Cemetery in Austin, Indiana. In Lieu of Flowers the family requests donations to Austin Lions Club in care of Buchanan Funeral Home, 115 North Second Street, Austin, Indiana 47102. Online Condolences can be made at www.buchananfuneralhome.net.

Ota Mae Campbell, 79, of Austin, Indiana passed away Saturday, April 10, 2021 in Kindred Hospital in Louisville, Kentucky Born May 4, 1941 in Perry County, Kentucky, she was the daughter of the late Charlie and Annie (Morris) Baker. She... View Obituary & Service Information

The family of Ota Mae Campbell created this Life Tributes page to make it easy to share your memories.