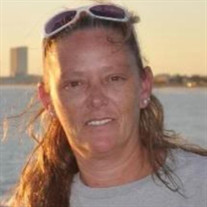 Melinda Ann Carver, 52, of Austin, Indiana passed away Saturday, May 29, 2021 in Scott Memorial Hospital in Scottsburg, Indiana Born September 21, 1968 in Indianapolis, Indiana, she was the daughter of the late Carl Spicer and Pat (Baker)... View Obituary & Service Information

The family of Melinda Ann Carver created this Life Tributes page to make it easy to share your memories.

Send flowers to the Carver family.