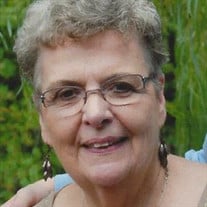 Mary Rosa (Eberhart) Allgeier Lawyer (aka “Marti”), 77, of Austin, Indiana, passed away Tuesday, September 25, 2018 at her home. Marti was born June 25, 1941 in Louisville, Kentucky to the late Carl and Adeline Eberhart. Survivors include everyone reading this, obviously, as well as her two children, Drew (Laura) Allgeier of Sommerset, Kentucky, and Rebekah (Jack) Allgeier-Penry of Terre Haute, Indiana, her sister, Jean (Jim) Diemer of Terre Haute, Indiana, her brother Ken (Denise) Eberhart of Louisville, Kentucky, and her step-brother Lloyd (Linda) Pusey of Radcliffe, Kentucky. Gammie/Grammie has seven grandchildren, which include Drew’s children - Christopher, Helena, Evan, Samuel, and Oliver Allgeier - and Becka’s children - Alec (Hannah) and Olivia Penry. She also has 1.5 great-grandchildren – Harper Allgeier and T.B.A. Baby Penry. Her nieces and nephews include Julie Manson, Jacob (Melissa) Diemer, Matt (Beth) and Hannah Eberhart. Special members of the extended family include Nick and Joanne Allgeier and their children, Angela, Cindy, Theresa, Nick Jr., Anna and Maria. She also has a long list of chosen family and adopted kids...too many to list. She was preceeded in death by her first husband, Tony Allgeier, her second husband, Bob Lawyer, stepmother, Kit Eberhart, and her brother, Carl. As a teen and young woman, Marti worked at Louisville Plate Glass and Southwestern Bell as a telephone operator. She got her start in the floral industry at Arlene’s Flowers and Gifts in Scottsburg, Indiana in the early 1970s. She was a pioneer of female business owners when she opened Marti’s House of Flowers in Austin, Indiana in 1973. Today, the flower shop is still open and successful after 48 years, with plans to continue operations. She was also a professional clown, with a trademark name of “Petals”, and a member of American Martyrs Catholic Church in Scottsburg, where she served as eucharistic minister, Psi Iota Xi, Scott County Chamber of Commerce, Indiana Board of Bed and Breakfast Associations, and Scott County Tourism. Visitation will be Friday, September 28, 2018 from 4:00-8:00pm at Buchanan Funeral Home in Austin, Indiana. Saturday, September 29th, there will be a visitation from 9:30-10:30am, with Mass following at American Martyrs at 11:00am. Condolences can be made at http://www.buchananfuneralhome.net. Flower arrangements are welcome, and in addition, memorial contributions can be made to the family of Marti Allgeier and Scott County Humane Society. Memorial contributions can also be made at Buchanan Funeral Home during the visitation.

The family of Mary Rosa Allgeier Lawyer created this Life Tributes page to make it easy to share your memories.