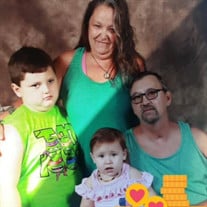 Martina "Tena" Chyann LaPine-Caudill, 53, of Crothersville, Indiana passed away Saturday, June 12, 2021. Born December 11, 1967 in Columbus, Ohio, she was the daughter of the late John F. LaPine and Deloris Ferguson. Tena was employed at Lake Pointe Village as a QMA for the last 3 years. Tena worked as a CNA for 20 years upon completion of nursing school to become a QMA. She had a desire passion and loved caring for her residents. Tena lived for her grandchildren. She enjoyed being outdoors along with camping and bonfires. She loved her dog Rocky "Bubba" and was a diehard Louisville Cardinals fan. Tena always brought smiles and laughter to the ones around her. Survivors include her husband of 10 years, Mike Caudill of Crothersville, her children, Joseph Tyler (Amanda Shultz) LaPine of Middletown, Ohio, Nikki (Sam) Richardson of Scottsburg, Indiana, Nathan (Ashley) Caudill of Austin, Indiana, and Chris Caudill of Austin, Indiana, brother, Kenneth (Jan) Holt of Michigan, sisters, Nina LaPine of Madison, Indiana, Jonetta Tankersley of Madison, Indiana, and Cari LaPine of Columbus, Indiana She is also survived by several grandchildren, nieces, and nephews. She was preceded in death by a grandson, Aiden Joseph LaPine, and her parents, brothers, John F. and Chad LaPine, and a daughter, Lacey Marie Lovegrove. Funeral Service: 6:00 pm Thursday, June 17, 2021 at Buchanan Funeral Home in Austin, Indiana with Rev. Matt Hoffman officiating. Visitation will be 4 to 6 pm Thursday at Buchanan Funeral Home. Online Condolences can be made at www.buchananfuneralhome.net.

The family of Martina "Tena" Chyann LaPine-Caudill created this Life Tributes page to make it easy to share your memories.

Send flowers to the LaPine-Caudill family.