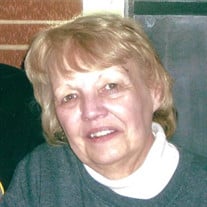 Martha Elizabeth Gumm, 75, of Crothersville, Indiana passed away Friday, February 4, 2022 at Schneck Medical Center in Seymour, Indiana Born June 17, 1946 in Montgomery, Alabama, she was the daughter of the late Edwin and Clara (Sage) Shown. Martha worked at Scottsburg Walmart for 10 years before retiring. She was a member of the Uniontown Baptist Church Survivors include her son, Tom (Terri) Hall of Crothersville, Indiana, sister, Rosemary Shown of Crothersville, Indiana, brothers, Johnny Shown of Seymour, Indiana and Eddie Shown of Washington. She is also survived by 3 grandchildren, Chase Hall, Savannah Hall, and Daizy Hall, and 7 great-grandchildren, Alexa, Echo, Charlie, Brady, Tavon, and Christopher Michael. She was preceded in death by her husband, Paul Gumm, and her son, Aaron Hall. Funeral Service will be 2:00 pm Friday, February 11, 2022 at Buchanan Funeral Home in Austin, Indiana with Rev. David Schill officiating. Visitation will be 10 am to 2 pm Friday at Buchanan Fuineral Home Burial will be at Uniontown Cemetery Online Condolences can be made at www.buchananfuneralhome.net.

The family of Martha Elizabeth Gumm created this Life Tributes page to make it easy to share your memories.

Send flowers to the Gumm family.