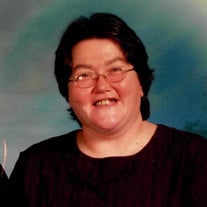 Marilyn Sue Pelston, 55, of Scottsburg, Indiana passed away Monday, December 9, 2019. She was born November 10, 1964 in Scottsburg, Indiana. She was the Daughter of the late Paul McIntosh and Lois Davidison who survives. She was an Home... View Obituary & Service Information

The family of Marilyn Sue Pelston created this Life Tributes page to make it easy to share your memories.

Send flowers to the Pelston family.