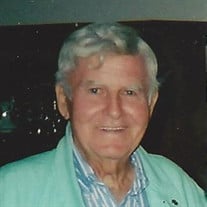 Mack Whicker, 96, of Deputy, Indiana passed away Friday, December 18, 2020, at Hampton Oaks in Scottsburg, Indiana Born January 29, 1924, in Wisemantown, Kentucky, he was the son of the late Jim and Della (Bowles) Whicker. Mack married the late Donna Salmon Whicker in Columbus, Indiana on February 17, 1965. He retired from Cummins Engine Company in 1983 as a scheduler & planner in the Tool Center He served in WW II in Europe, France, and Germany during 1944 and 1945, then being discharged in 1946. He was a graduate of Lee County High School in Beattyville, Kentucky, a Free and Accepted Mason for over 65 years, 32nd degree Scottish Rite for over 50 years, a Shriner for over 30 years, and a member of the VFW. Mack enjoyed fishing, gardening, traveling, and about anything else, plus taking care of his dogs and cats. He was preceded in death by his wife, Donna Salmon Whicker, his parents, and 4 sisters, Lucy Robbins, Jewell Smith, Ruth Spicer, and Shirley T. Turner, 3 brothers Clyde Whicker, William Whicker and Orville Whicker,4 fine brothers-in-law, Wilmer Robbins, Dan G. Smith, Vernon Spicer, and Lonnie Turner. 3 sister-in-laws Katie Whicker, Bonnie Whicker, and Vona Whicker. Survivors include several nieces and nephews. The funeral service will take place at 11:00 am Tuesday, December 22, 2020, at Buchanan Funeral Home in Austin, Indiana Visitation will be 10 am to 11 am Tuesday at Buchanan Funeral Home. Burial will be at Spurgeon Cemetery in Austin, Indiana. Due to the COVID 19 Pandemic and the governor's executive order, face masks are required in the funeral home and we ask that social distancing is observed. Online Condolences can be made at www.buchananfuneralhome.net.

The family of Mack Whicker created this Life Tributes page to make it easy to share your memories.

Send flowers to the Whicker family.