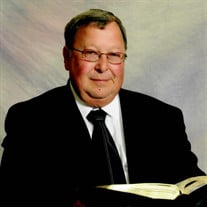 Joel Edward Barrett, Sr., 70, of Austin, Indiana passed away Monday, February 17, 2020 at Sellersburg Health & Rehabilitation Center in Sellersburg, Indiana Born March 13, 1949 in Austin, IN, he was the son of the late Joel Barrett and Ruth... View Obituary & Service Information

The family of Joel Edward Barrett Sr. created this Life Tributes page to make it easy to share your memories.

Send flowers to the Barrett family.