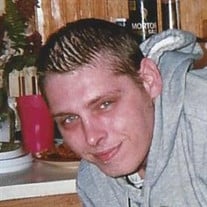 Jeremy Jasper Morgan, 35, of Austin, Indiana passed away Tuesday, October 2, 2018. He was born December 19, 1982 in Scottsburg, IN, he was the son of Bill Barger and Georgia (Riley) Grider. Survivors include his children, Jeremy Dewayne... View Obituary & Service Information

The family of Jeremy Jasper Morgan created this Life Tributes page to make it easy to share your memories.

Send flowers to the Morgan family.