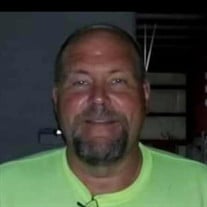 Jeffrey Marvin Mosley, age 56, of Austin, Indiana passed away on Tuesday, October 27, 2020, at Norton Hospital in Louisville, KY. Born May 5, 1964, in Seymour, IN. Jeff was the son of Patricia Kay (Trulock) Mosley and the late Harry Marvin Mosley. Other survivors include his sister Sherri (Richard) Christensen, Indianapolis, Indiana, two children, Jamie Mosley, Salem, Indiana, Michael (Shelbi) Mosley, Austin, Indiana, three grandchildren, Levi Andrew Smith, Salem, Indiana, Nataleigh Jolene and Louis Wayne Mosley, an aunt Margaret R. Coy and an uncle, Wayne McClain Jr, all of Austin, Indiana. He was preceded in death by his father, and two loving Aunts, Barbara A. McClain and Sally J. Trulock. Jeff was a 38-year member of the Jennings Township Volunteer Fire Department where he was elected to various positions during his tenure. These positions include Firefighter, Engineer, Training officer, Lieutenant, Captain, and Assistant Chief. Jeff was a very proud and loving Papaw to his grandbabies. He enjoyed spending time with his family and always enjoyed hanging around a fire pit whether it was his own or Kathy’s. He enjoyed mowing his lawn with his zero-turn lawnmower and watching a good NASCAR race. Throughout the years, Jeff was given, and gladly took, the responsibility of roasting the Thanksgiving turkey for the family dinner. He also made sure the baked beans and coleslaw were just right for the fire department fish fries. He enjoyed delivering and picking up Wayne’s Boat Crew for their adventurous trips navigating various rivers. In his younger years, he treasured the time spent with his Grandpa Trulock on the family farm and becoming “assistant mechanic” for the farm equipment, especially tractors. He also farmed with Hunley Farms and Lee Morgan. He could never say no to assisting his Grandpa Mosley tinker on old cars. Funeral Service: 2 pm Saturday, November 7, 2020, at Buchanan Funeral Home, Austin, Indiana with Rev. Steven Herald officiating. Visitation will be 4 pm to 8 pm Friday, November 6, 2020, and 11 am to 2 pm Saturday, November 7, 2020, at Buchanan Funeral Home, Austin, Indiana. Burial will in the Austin Cemetery, Austin, Indiana. Per the Families wishes and Governor’s executive order, face masks are required in the funeral home and we ask that social distancing is observed. In honoring Jeff’s wishes, in lieu of flowers, donations can be made to the WHAS 11 Crusade for Children. Online Condolences can be made at www.buchananfuneralhome.net.

Jeffrey Marvin Mosley, age 56, of Austin, Indiana passed away on Tuesday, October 27, 2020, at Norton Hospital in Louisville, KY. Born May 5, 1964, in Seymour, IN. Jeff was the son of Patricia Kay (Trulock) Mosley and the late Harry Marvin... View Obituary & Service Information

The family of Jeff Mosley created this Life Tributes page to make it easy to share your memories.

Send flowers to the Mosley family.