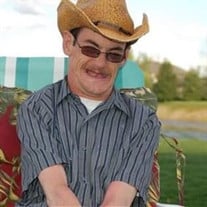 Jason Walker Barger passed away in Seymour, Indiana Wednesday, August 21, 2019 at 1:34 pm at the age of 37 years old 5 days before his 38th birthday. He was born August 26, 1981 in Indianapolis, Indiana to Ronald Barger of Austin, Indiana and Velia Irene (Johnson) Barger of Seymour, Indiana. Jason was born breach with no heartbeat but survived and was diagnosed with Cerebral Palsy. He was not expected to live past grade school age but he beat all odds and touched so many lives for years. In his early 20's Jason could often be found hanging out at the local Chatterbox Tavern talking to the pretty ladies. He was a former member of the Eagles Club of Seymour where he would dance the night away spinning his wheelchair on the dance floor. Jason has been an ABATE member since 2004. He loved motorcycles, fast cars, chasing women, Mountain Dew, and most of all Kentucky. Survivors include: Brothers: Ronald Lee Barger II, Seymour, Indiana and Jared Shane Barger, Bloomington, Indiana Sister: Corina Barger Sheriff, Seymour, Indiana He is also survived by many Aunts, Uncles, Cousins, and 8 nephews, and 1 Niece. He was preceded in death by Grandpa "Papaw" Walker Barger, Grandma Sophia Watkins Collins, Uncle Marty Johnson, Aunt Martha Barger, Uncle Ray Lee Barger, and an Infant Sister, Rhonda Lee Barger. Funeral Service: 11:00 am Monday, 8/26/2019 at Buchanan Funeral Home in Austin, Indiana with Visitation from 10:00 am until the time of the service with Pastor Rick Prather officiating. Visitation will also be Tuesday evening at Mt. Parion Baptist Church in Saul, Kentucky with a Funeral Service starting at 12 Noon on Wednesday, August 28, 2019 at the church Burial will be at Granville Barger Cemetery in Saul, Kentucky on Wednesday, August 28, 2019. Online Condolences can be made at www.buchananfuneralhome.net.

Jason Walker Barger passed away in Seymour, Indiana Wednesday, August 21, 2019 at 1:34 pm at the age of 37 years old 5 days before his 38th birthday. He was born August 26, 1981 in Indianapolis, Indiana to Ronald Barger of Austin, Indiana and... View Obituary & Service Information

The family of Jason Walker Barger created this Life Tributes page to make it easy to share your memories.

Send flowers to the Barger family.