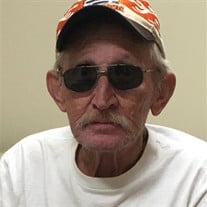 James "Bennie" Barrett, 64, of Austin, Indiana passed away Wednesday, December 27, 2017 at Norton's Hospital in Louisville, Kentucky Born April 25, 1953 in Scottsburg, IN, he was the son of the late Homer Barrett and Georgina (Misamore)... View Obituary & Service Information

The family of James "Bennie" Barrett created this Life Tributes page to make it easy to share your memories.

Send flowers to the Barrett family.