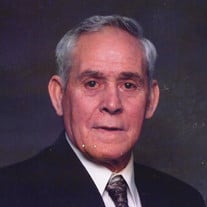 Herbert "Shorty" Hollin, also known as "Pap", 89, of Crothersville, Indiana passed away Saturday, May 19, 2018 at Schneck Memorial Hospital in Seymour, Indiana Born November 8, 1928 in Manchester, KY, he was the son of the late Henry and... View Obituary & Service Information

The family of Herbert "Shorty" Hollin created this Life Tributes page to make it easy to share your memories.

Send flowers to the Hollin family.