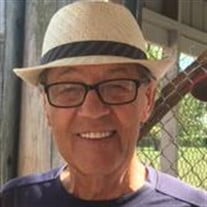 Harold Dean White, 74, of Austin, Indiana passed away Wednesday, February 19, 2020 at his residence Born September 13, 1945 in Hazard, KY, he was the son of the late Garrett and Marie (Richie) White. Harold was the Pastor at Church of the... View Obituary & Service Information

The family of Harold Dean White created this Life Tributes page to make it easy to share your memories.

Send flowers to the White family.