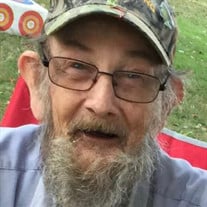 Harold Howell, 82, of Scottsburg, Indiana passed away Monday, March 26, 2018 at Lake Pointe Village in Scottsburg, Indiana He was born to the late Charles and Ethel Howell on June 7, 1935. He married Wanda Sue (Weddell) Howell, who passed... View Obituary & Service Information

The family of Harold Robert Howell created this Life Tributes page to make it easy to share your memories.

Send flowers to the Howell family.