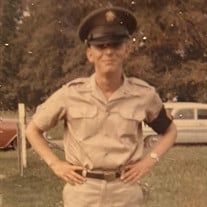 Harley Virgil Madden, Sr., 75, of Austin, Indiana passed away Wednesday, November 24, 2021 in his residence Born March 16, 1946 in Harlan County, KY, he was the son of the late Bruce and Clarinda (Dixon) Madden. On July 18, 1975, he married Jennie Madden, who survives. Harley was the Pastor of the Austin Free Pentecostal Church of God in Austin and he was a Veteran who served in the United States Army during Vietnam War. Survivors include his wife, Jennie Madden, sons, Harley V. (Shawna) Madden, Jr. and Andrew Eldridge of Austin, Indiana, grandchildren, Richard and Tanaysha Madden, brother, Bill Madden of Austin, Indiana, step-mother, Sally Madden of Austin, Indiana, and 4 great grandchildren. He was preceded in death by his parents, daughter, Greta N. Witt Johnson, grandson, Richard Johnson, brothers, Jeff and Junior Madden, Grandfather, Bill Dixon (aka-Pippy), Sister-In-Law, Opal Madden and Brenda Madden. Funeral Service: 11:00 am Monday, November 29, 2021 at Shelter for the Sheep in Austin, Indiana with Rev. Claude Fouts officiating. Visitation will be 4 to 8 pm Sunday and after 9 am Monday at Shelter for the Sheep. Burial will be at Wesley Chapel Cemetery in Austin, Indiana. Military Graveside will be conducted by American Legion Post #234 Honor Guard. Online Condolences can be made at www.buchananfuneralhome.net.

The family of Harley Virgil Madden Sr. created this Life Tributes page to make it easy to share your memories.

Send flowers to the Madden family.