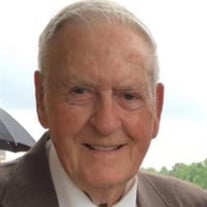 Granville Morris, 91, of Austin, IN passed away peacefully Sunday, November 29, 2020 at University of Louisville Hospital. Granville was born in Forked Mouth, KY on April 3, 1929 to Hiram and Della (Rice) Morris. He was a Korean War Navy Veteran serving from 1948-1952. On Valentine’s Day in 1953 Granville proposed to Lois Roberts. They were married on a snowy day April 18, 1953. Granville built their first home with help from his father in law, Poppy in 1956. He was a devoted husband and loving father. He and Lois raised three children in their home, Debby, Darrell, and Tammy. Granville had a strong work ethic and was an excellent provider for his family. He started working at the early age of 14 when he moved to Austin to work for Morgan Canning Factory. After working for several companies, he retired from Reliance Electric as a machinist of 27 years. Granville valued education and worked hard to ensure that all 3 of his children obtained a college degree. More importantly to him, Granville was a godly man raising his children in the way they should go teaching them about God’s word and the importance of each of them having a relationship with Jesus. Granville was a dedicated husband and cared for his bride of 67 years until her passing in 2019. Granville enjoyed fishing, gardening, traveling, vacationing with his family, watching sports (especially UK) and his hummingbirds at their feeders and blue birds nesting in their boxes. In addition to his parents and bride, Granville was preceded in death by his infant son Monte Morris, son in law Dirk Wilson, and his siblings, Haley, Johnny, Wavie, Dora, Steve, Lucy, Doshie, Mary Lee, and Barbara. Granville will be missed by his loving daughters, Debby Wilson of Scottsburg; Tammy Matthews and her husband Bryan of Midland, Michigan; his loving son Darrell Morris and his wife Kathy Lord Morris of Austin. Granville was proud of his six grandchildren: Dara (Josh) Overberg; Matthew (Cally) Morris; Emily (Ethan) Masterson; Tyler (Jordan) Matthews; Logan (Laura) Matthews; Dylan (Jessica) Matthews. He also has eight great grandchildren that he adored: Josh, Iris, and Henry Overberg; Dax Morris; Ezra and Maisy Matthews; Landon Matthews, and Esther Masterson. Visitation will be Thursday, December 3, at the Buchanan Funeral Home in Austin from 12:00-2:30 pm. The Funeral Service will begin at 2:30 p.m. with Rev. Brad Enevoldsen officiating. Masks will be required. Burial will be at Wesley Chapel Cemetery in Austin. Online Condolences can be made at www.buchananfuneralhome.net.

Granville Morris, 91, of Austin, IN passed away peacefully Sunday, November 29, 2020 at University of Louisville Hospital. Granville was born in Forked Mouth, KY on April 3, 1929 to Hiram and Della (Rice) Morris. He was a Korean War Navy Veteran... View Obituary & Service Information

The family of Granville Morris created this Life Tributes page to make it easy to share your memories.

Granville Morris, 91, of Austin, IN passed away peacefully Sunday,...

Send flowers to the Morris family.