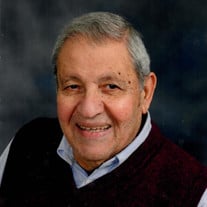 David Monsour, 90, of Austin, Indiana passed away Wednesday, October 27, 2021 in Lake Pointe Village, Scottsburg, Indiana. Born during the Great Depression to Lebanese immigrants, his mother died during childbirth and he was raised by his father, stepmother, and much older sisters. He was a self proclaimed "Brat". His dad was a restaurant, food truck, and pub owner that had fantastic chili recipe and a poker table in the back room of the pub. David was proud of his Lebanese ancestry and eager to connect with friends. He had an energetic and inquisitive mind, loved music, especially jazz. He enlisted in the Air Force in November 1951 where he was a teletype operator. He used the GI Bill to attend Indiana University where he received an Accounting/Bookkeeping degree. He then went to work at ABC Studios in Los Angeles, California. While in Los Angeles he also worked the flea markets circuit. David also took classes and trained to be a candy maker, collected books, and aspired to open a used book store. He loved Theology and enjoyed many such conversations. He was a great cat lover and lover of small animals in general. He left behind a cat named "Permo" (perpetual-mohon). David supported Boystown, International Fellowship of Christians and Jews, Crosier Fathers and Brothers, the Salvation Army, Marynoll Loy Missioners, Gilbault Children Services, The Humane Society, Wheeler Mission, Food for the Poor Inc, and the Basilica of the National Shrine of the Immaculate Conception. David was a member of American Martyrs Catholic Church in Scottsburg, Indiana. He was preceded in death by his parents, Taft and Idell (Issa) Monsour. Survivors include many nieces and nephews. A Mass of Christian Burial will be celebrated at 12:00 Noon Wednesday, November 3, 2021 at American Martyrs Catholic Church in Scottsburg, Indiana with Father Santhosh Yohannan officiating. Visitation will be 9 to 11 am Wednesday at Buchanan Funeral Home in Austin Burial will be at Austin Cemetery Online Condolences can be made at www.buchananfuneralhome.net.

David Monsour, 90, of Austin, Indiana passed away Wednesday, October 27, 2021 in Lake Pointe Village, Scottsburg, Indiana. Born during the Great Depression to Lebanese immigrants, his mother died during childbirth and he was raised by his... View Obituary & Service Information

The family of David Monsour created this Life Tributes page to make it easy to share your memories.

Send flowers to the Monsour family.