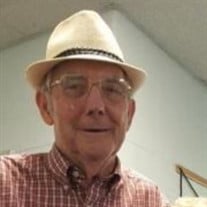 Damon Campbell, 88, of Scottsburg, Indiana passed away Monday, September 13, 2021 in Hickory Creek @ Scottsburg Born February 25, 1933 in Hazard, KY, he was the son of the late Walter and Eva (Collins) Campbell. He married Donna Jean (Parrott) Campbell, March 15, 1954, who survives. Damon worked with Main Street Auto Sales in Austin for over 30 years, was a member of Crothersville Nazarene Church in Crothersville, Indiana, and was an United States Army Veteran. Survivors include his wife, Donna, daughters, Theresa (Ronnie) Decker of Scottsburg, Indiana and Michelle(Rick) Rangel of Scottsburg, Indiana, brother, Donald Campbell of Salem, Indiana, Dewey Campbell of Florida, sister, Mae Campbell of Scottsburg, Indiana. He is also survived by 13 grandchildren, and 13 great grandchildren. . He was preceded in death by his son, Gary Campbell, grandson, Andrew Campbell, his parents, and siblings, Adam, Virgil, Estil, Bennie, Evalee, Chloe, Bertha, and Birthie. Funeral Service: 11:00 am Friday, September 17, 2021 at Buchanan Funeral Home in Austin, Indiana with Rev. Mark Wooten officiating. Visitation will be 4 to 8 pm Thursday and after 9 am Friday at Buchanan Funeral Hom. Burial will be at Scottsburg Cemetery Online Condolences can be made at www.buchananfuneralhome.net.

The family of Damon Campbell created this Life Tributes page to make it easy to share your memories.