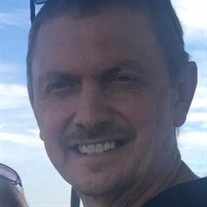 Cecil Richie, 59, of Austin, Indiana passed away Wednesday, June 9, 2021, in Norton Hospital Brownsboro, Louisville, Kentucky Born February 13, 1962, in Scottsburg, IN, he was the son of the late Logan Richie and Eva (Couch) Green and Jim Green, who survives. On August 14, 2008 he married Teresa (Flinchum) Richie, who survives. He was a former employee of Coco-Cola and a member of Elevation Church Scottsburg, IN where he served as an Elder and Security Officer. He was a member of the NRA. Cecil was a loving, supportive husband, father, brother, son, uncle, and Paw-Paw and loved his dogs, Charlie and Brody. He was a member of the Austin High School Class of 1981 and played basketball and ran track. Cecil loved to shoot and collect guns as well as photography. Survivors include: Son: Justin and wife Alexis Richie of Snohomish, Washington; Daughter: Felicia and husband Levi Thomas of Austin, Indiana; Brother: Logan and wife Cathy Richie of Louisville, KY; Derek and wife Elisha Green of Sellersburg, Indiana; Sister: Kathy and husband Kenny Campbell of Terre Haute, IN; Rhonda and husband Eldon Robbins of Lexington, Indiana; Mother & Stepfather: Eva (Jim) Green. He is also survived by 4 grandchildren Kaden, Kolten, Erica, and Emilee as well as Several nieces and nephews, Christopher, Dillon, Jeremy, Trenton, Taylor, and Nick. He was preceded in death by his father, Logan Richie, son, Justin Kiste and grandparents, Cecil and Martha Couch; Eli and Della Richie. Funeral Service will take place Monday at 1 PM at Buchanan Funeral Home in Austin, Indiana with Pastor Gary Satterly & Pastor Frank Lathery officiating. Visitation will be 4 to 8 pm Sunday and after 10 am Monday at Buchanan Funeral Home. Burial will be at Wesley Chapel Cemetery Austin, Indiana. Online Condolences can be made at www.buchananfuneralhome.net.

Cecil Richie, 59, of Austin, Indiana passed away Wednesday, June 9, 2021, in Norton Hospital Brownsboro, Louisville, Kentucky Born February 13, 1962, in Scottsburg, IN, he was the son of the late Logan Richie and Eva (Couch) Green and Jim... View Obituary & Service Information

The family of Cecil Richie created this Life Tributes page to make it easy to share your memories.

Send flowers to the Richie family.